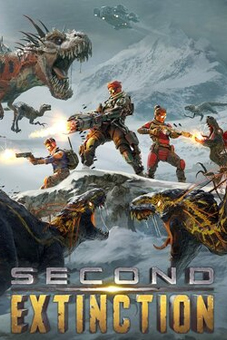 
PROJECT DESCRIPTION
Second Extinction is an intense 3 player cooperative shooter. Teamwork is vital as you adopt the role of one of the survivors, using a unique combination of weapons, abilities and skills to take on the vast number of mutated dinosaurs that have taken over the planet.


DIALOGUE EXAMPLES - The different results generated by the dialogue system
ABOUT MY WORK
I was tasked with writing and implementing the narrative on Second Extinction, which was in many ways very different from anything I had ever worked on before. Not only was it a three-player co-operative game with story missions, it also had four main characters with unique personalities, traits and abilities. The story and the protagonists had already been conceptualized when I joined the project, but I had the pleasure of defining their characters, writing their dialogue and relationships - as well as defining the narrative and lore of the game. Ortega, Jürgen, Rosy and Amir were also joined by Sarah, their plucky ops handler and Director Pearce - the person in charge of the missions.

The team aimed for having characters that were fun, likeable and who would react and behave in a dynamic way throughout the gameplay. Since it was impossible to know what characters would be in a game at the same time, I worked closely with a small team of programmers and our audio lead to develop our dialogue system to fit our needs. The dialogue would be written in a dynamic way in which one line would open for multiple answers, only to have the system choose what person would answer and what they would say. I also had a much more active role in casting and directing the voice actors than on previous projects.

Another outspoken goal for the narrative of the game was for the characters to be diverse and well thought out. While Amir is American - Ortega, Jürgen and Rosy were characters originating from Colombia, Germany and Cameroon respectively. This presented a lot of challenging but very exciting research into regional phrases and cultural expression to ensure that what the characters were saying in the heat of battle felt authentic. We had the good fortune of finding fantastic voice actors who themselves came from these regions who also had great insights into the lines.

Finally, with Second Extinction being a live-product, I also worked to format scripts and dialogue implementation in a way that would allow for future characters to be easily implemented from script-writing to final lines in-game. I learned a lot during this project, from working with with dynamically triggering dialogue to all facets of casting, recording and direction-aspects of voiced dialogue.